HA NAM, Vietnam, July 5, 2019 /PRNewswire/ — Scientists warn there are only a dozen years before millions of people experience the risks of drought, floods, extreme heat and poverty[1] due to climate change. This warning was also announced loud and clear to world leaders, Buddhist leaders, and Buddhists around the world at the United Nation’s 2019 Vesak Festival through one single painting. 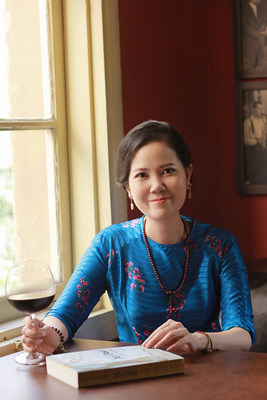 Using a simple painting style, Mrs. Nguyen wanted the artwork to pass from “heart to heart”, relaying her love for the environment, like in Chinese philosopher Lao Tzu’s words: “People rely on land, land relies on God, God relies on religion, religion relies on nature”. She also wanted people to realize that the planet can only be saved if they change their wasteful and polluting habits.

105 copies of this painting were given to the heads of states and leaders of Buddhism from over 100 countries who attended attend the Vesak celebrations. They include Buddhist leaders such as Professor, Dr. Phra Brahmapundit – Chairman of the International Council for the Day of Vesak (ICDV), Mr. Nguyen Manh Hung – Minister of Information and Communication of Vietnam, Ryan Giggs – Coach of the Welsh National Football Team, the Prime Minister of Nepal, the President of Bhutan’s Senate, and Sang Ji Zha Xi – Deputy Secretary General of the Chinese Buddhist Church. They were all very sympathetic and touched upon receiving the painting. 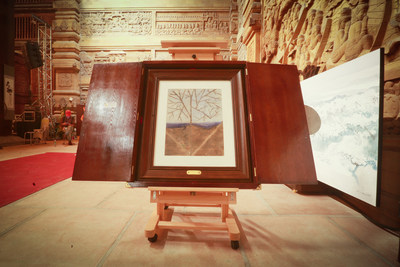 “Through the ‘Cover of Future’, I want to remind world leaders about their responsibility of preserving our world. As the decision-makers, they must take the lead in this fight to spread the message of taking responsibility to protect the environment to their people and if they don’t take action straight away, the world will end. I want to see them hang this picture in their living room, so they can be reminded of their duty daily,” said artist Nguyen Thi Kim Duc.

Nguyen Thi Km Duc currently serves as the Director of the Institute of Human Resources – HV Talent and the Chairman of the board of HTD Media Joint Stock Company. She also founded Butta, the first social network for the Buddhist community in Vietnam.

Mrs. Nguyen’s passion for the environment is a result of her father’s influence. Her father is the well-known Vietnamese author Nguyen Son Dong who wrote the famous novel “Xu Doai May Trang” and many Vietnamese poems. Mrs. Nguyen said her father’s poem “The Freshness To Life” shaped her passion in helping preserve the world humans live in.

“On a block of wood this afternoon
Raindrops were so small
It pained my heart
But the forest was vast
People’s immensity as well,
Please join me!
For evergreen forest
The freshness to life”

From “The Freshness To Life”

Mrs. Nguyen hopes that “Cover of Future” will be considered as a brand ambassador for our environment and anti-climate change, and hopefully be present around the world to promote the Green Planet protection in the future.

November 9, 2020 web desk Comments Off on First Passengers Travel Safely on a Hyperloop

November 16, 2018 web desk Comments Off on PTAB Grants 100% of MIAX’s Invalidity Petitions Against Nasdaq Patents with Sixth and Final Petition Granted This Week